Amazon announced three new Alexa-enabled products on Wednesday: a smart sticky note printer, nutrition scale and cuckoo clock. But there’s a catch — the tech giant will only ship these items if enough people pre-order them.It’s like Kickstarter for Alexa. Artists, startups and organizations typically turn to Kickstarter to pitch new products and hit a certain funding goal to help the project get off the ground.

Now Amazon is doing something similar, except the trillion-dollar company certainly doesn’t need help raising money for its production process.Instead, Amazon’s new program, called Build It, aims to give customers a say in what it creates next. The tech giant has been stuffing its voice-control software into nearly everything in the past few years, including its speakers, microwaves, glasses and earbuds.

Do we really need an Alexa-enabled cuckoo clock that lets you set timers? Maybe. Amazon  will know in 30 days if it’s something customers actually want.If a concept reaches Amazon’s pre-order goal, it’ll arrive on doorsteps this summer. If interest is lacking, Amazon will stand down and shoppers won’t be charged. 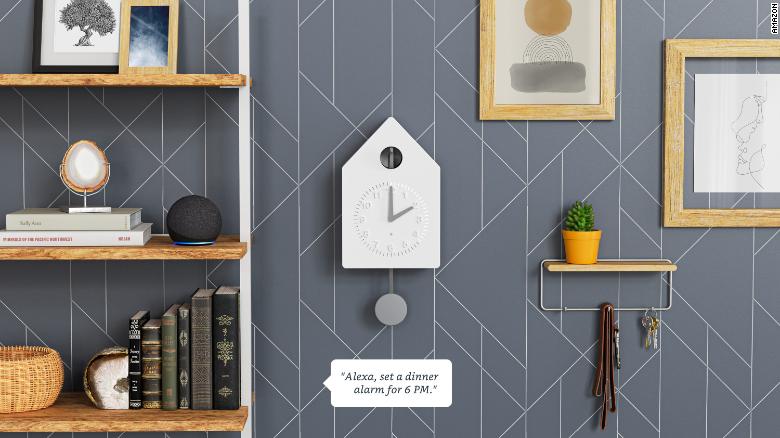 Amazon’s cookoo clock, available now for pre-order, is Alexa-enabled. If there’s enough customer interest, it’ll ship later this summer”It’s low risk, high reward, and a whole lot of fun,” Amazon said in a blog post. “If your favorite concept doesn’t get built this time, don’t worry — there are more fun ideas to come.”But it also comes at a time of widespread concerns about how Amazon uses data to fuel its dominance.

The company has faced scrutiny for allegedly using sales data from sellers on its platform to determine which products are popular and what Amazon should begin to sell. (Outgoing CEO Jeff Bezos told Congress last year that Amazon has a policy prohibiting the use of third-party seller data to support Amazon’s private-label business, but he said he “can’t guarantee” it was never violated.)

If Amazon were to lean on this Kickstarter model more often, it would effectively gain additional user data that could help it launch countless products — some perhaps similar to others already on the market — while minimizing the chance and cost of any flops in the process, potentially making it that much more of a fearsome competitor.

The three new concepts introduced this week come from inventors, designers and engineers within Amazon: To start, there’s a $89.99 hands-free smart sticky note printer the size of a receipt printer you’d see next to a cash register. It works with Alexa to print shopping lists, reminders and calendar events on small Post-it-sized notes.

Meanwhile, a $34.99 smart scale lets you ask Alexa to weigh 200 calories of blueberries and provides nutritional information for thousands of ingredients and food based on weight. Finally, the cuckoo clock ($79.99) features a mechanical pop-out cuckoo bird, built-in speakers for timers and alarms and can be mounted on the wall or sit on a shelf. 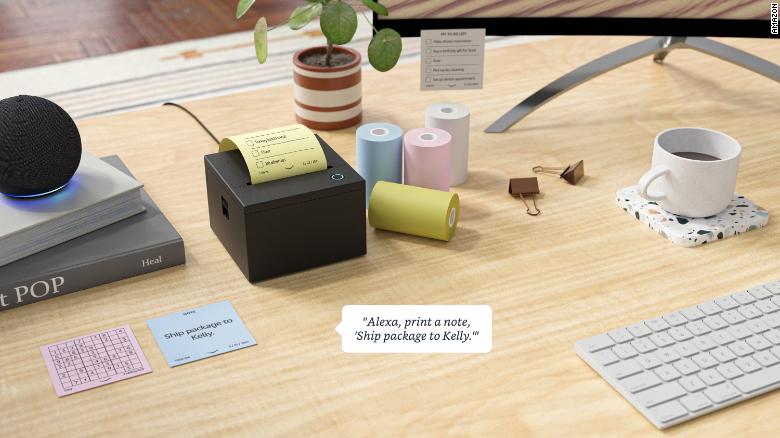 Amazon’s concept gadget for an Alexa-enabled sticky-note printerThe company said it has produced some workable models for each item to make sure development was possible.The effort is an expansion of Amazon’s Day One Edition program which launched last year to give customers access to new products the company wanted early feedback on.

For example, its Echo Frames — Alexa-enabled smart glasses — required people to sign up online for an invitation to make a purchase. Shoppers were then asked to provide direct feedback about the item. Amazon ultimately moved the glasses into production and they’re now available to everyone for $249.00 on the site.

At the same time, Amazon retired its Loop smart ring concept after lackluster feedback.The company told CNN Business it won’t publicly list the goal amount for the new products, but product pages will display a percentage progress bar to show how close they are to the benchmark.